How much embarrassment can one take from a country? From making global headlines during the Olympics for unpaid fees and more to owing champions (winners of the recently concluded Africa Women’s Cup of Nations (AWCON)) who should be welcome to the presidential villa with red carpet and trumpets; it is been a year fraught with disgrace and incompetence on the part of the leaders in the sports scene.

This Instagram post by Tommy B  aptly summarizes the disappointment and embarrassment of the situation after the athletes went out to protest in public over unpaid fees.

“… Just look at the atrocious way we have treated these ladies who have expended blood, sweat and tears to win Nigeria an 8th trophy at the African Women competition. These girls are the best on the continent, they are the most successful on the continent and one of the best in the world, and they have had more success at all levels than their male counterparts, yet are treated worse than rubbish.

We should all be ashamed that Cameroon who our team beat in the final have been given a rousing reception by their country with the president and his wife in attendance. In our case they are yet to be paid their allowance, there are no plans to host them, they are being threatened with life bans and no compliment is being paid them.

Would we have treated these girls this way if this were the Super Eagles? Would we have made them travel by commercial flight instead of chartered as we do for the men? Would we have deprived them of their allowances and match bonuses if they were the men’s team? Have we been fair to these girls?…” – Tommy B (via Instagram) 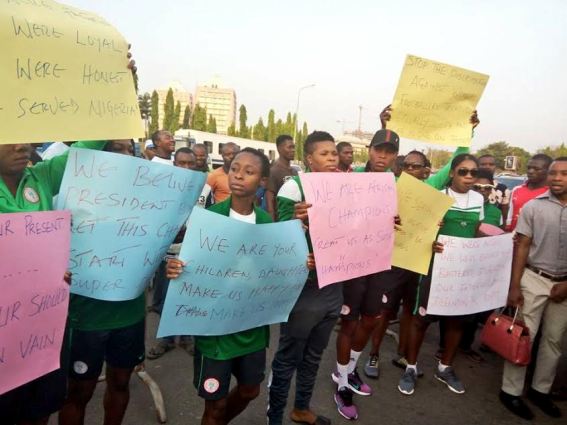 One thing worthy of note is that whilst the country is “broke and in recession”, the fees for the sports minister, NFF chairman, senators and leaders across board have not been held off neither have they been reduced. True leadership drives change and impact from the top down and do not suffer the citizens to make ends meet… last time we checked, the people were still sovereign and democracy is still FOR the people.

President Buhari, Amaju Pinnick (NFF Chairman) and the entire leadership of Nigeria need to come together to do right by these sports men and women who against all odds, go out to give their best to the nation.

In The Beginning, There Was MMM!