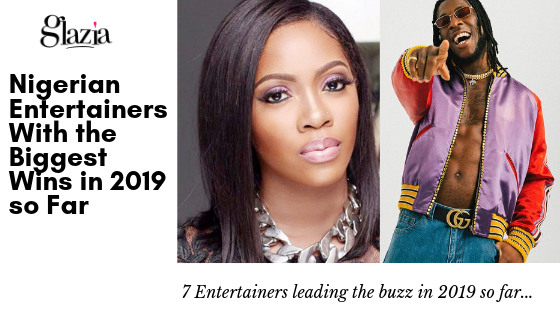 The Nigerian music industry just keeps getting bigger and Nigerian entertainers have proven that the industry is here to stay, and to keeping setting the tone in African and all over the world. So who are the artistes that keep things buzzing? From banging music to new record labels, international performances, brand ambassadorships, partnerships, new signees and so much more, we bring you a list of 7 Nigerian entertainers with the biggest wins so far in 2019.

Damini Ogulu, popularly known as Burna Boy, is a Nigerian Afro-fusion singer and songwriter. He has been at the top of his game from the release of his album “Outside” early 2018 which debuted at number 3 on the Billboard Reggae Albums chart. The album’s biggest single “Ye” ended up atop most Nigerian publications year-end list as the biggest song of 2018 and  Burna Boy himself ended the year as Nigeria’s biggest artist of 2018 having pulling out a  sold-out crowd at London’s O2 Academy Brixton with top songs “On the Low, Gbona and Killin Dem”.

Early this year, he released a song titled “Dangote” that got everyone buzzing before he was announced alongside Mr Eazi, as one of the artists performing at the 2019 Coachella Valley Music and Arts Festival. The controversy that surrounded his African Giant comment – protesting why his name was written in smaller font on the Coachella Festival bill – made him win the more as he was all over the news and on everyone’s lips, trending for days!

The Afrobeats sensation was also announced as the new brand ambassador for Star Lager Beer. He won four awards at the Soundcity MVP Awards Festival, including African Artiste of the Year, Listener’s Choice and Best Male MVP. In March 2019, He released a 4-track collaborative EP with Los Angeles-based electronic duo DJDS, titled Steel & Copper. He also became first Nigerian artist to be chosen as an ‘artist on the rise’ by YouTube Music, to recognise the way he’s building an audience around the world with his videos. Burna Boy was recently nominated for the Best International Act award category in the BET Awards alongside Mr Eazi and AKA. 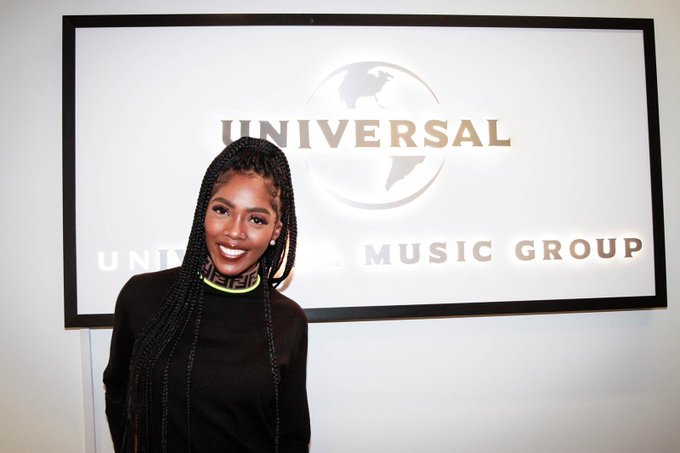 Tiwa Savage is a singer and acclaimed songwriter. When talking about Nigerian entertainers, you have to hand it to Tiwa Savage. In what is almost a boy’s club, this afrobeats queen is holding it down for the ladies, getting the bill and retaining her seat at the table where mostly men command the biggest fees. She is regarded as the queen of the music industry with her hit single “Lova Lova” featuring Duncan Mighty.

Late last year, she made world history after winning Best African Act at the 2018 MTV Europe Music Awards, becoming the first woman to win the category. In December 2018, Savage performed at the 2018 Global Citizen Festival: Mandela 100, which took place at the FNB Stadium in Johannesburg, South Africa and has been added to lineup of artists who will be performing at the upcoming Wireless Festival. The singer had a really quite start of the year with minimal social media presence  but just like the phoenix, she rose savagely. Savage’s biggest win so far was signing a record deal with Universal Music Group on 2nd May 2019 after saying goodbye to Mavin Records. Let’s not forget her custom luxury car which would have set her back some pretty millions in April. She definitely recovered fast from that spend as she was also unveiled as the brand ambassador of Star Radler in May…. kaching!

3. Davido:  You can’t talk about Nigerian entertainers anymore and not mention Davido. The leader of the 30 billion gang has been hot since he entered the Nigerian entertainment scene but he’s had a constant stay at the top since 2017 after releasing massively successful singles, IF and FALL which just won’t stop growing in popularity. It’s 2019 and FALL by Davido is still riding the charts in the US and loved by all the biggest American celebs. From an award filled 2018 with many new records set, Davido is keeping the energy in 2019.

Performing all around the world in global tour that never seems to end and international concerts like J.Cole’s Dream Fest, Kaya Fest in Miami, and billed to perform at Hot97’s Summer Jam and Essence Festival in June and July respectively, Davido’s reign just won’t let up. Getting to 11M followers and becoming Nigeria’s most followed account on the gram should count as winning shouldn’t it? Let’s not forget him marking a pivotal point in his career in January 2019 at his sold out concert at the 20,000 capacity London O2 Arena with his DMW crew who have  all been at the top of their games.

Davido also made major headlines with his involvement in politics and being very vocal about Nigeria’s 2019 elections. He was invited to perform at some of PDP’s biggest campaign events and the singer also promoted a bipartisan citizen initiative, Defend Your Vote. The DMW boss has also had some international collaborations such as new feature by American rapper, Russ in “All I Want”; collaboration with music band Clean Bandit in late 2018 and Quavo. The singer who had a US Media tour this year, was recently featured as a guest on Nick Cannon’s Wild ‘n Out show.

Mr Eazi, is a Nigerian singer, songwriter, and entrepreneur. He brings a fusion of Ghanaian highlife and Nigerian chord to make his music outstanding. He released his second album titled “Lagos to London” in 2018 with hit track “Surrender” featuring Simi and “Dabebi”. He was announced alongside Burna Boy, as one of the artists performing at the 2019 Coachella Valley Music and Arts Festival and his performance got everyone talking for days. He was recently nominated for the Best International Act Award category in the BET Awards alongside Burna Boy and AKA.

Teni is a Nigerian entertainer and songwriter. Like her social media handle suggests, she is an entertainer through and through….  In recent times, she has constantly blown our minds with amazing songs like Wait, Askamaya, Case and Uyo Meyo that got everyone in their feelings at the end of 2018. Her hit single “Askamaya” was ranked 15th on MTV Base’s year-end list of the Top 20 Hottest Naija Tracks of 2018. Teni won Rookie of the Year at the 2018 Headies Awards, and Most Promising Act to watch at the 2018 Nigeria Entertainment Awards.  She also won Best New Artist 2018 Soundcity MVP Awards Festival. She was also ranked eighth on the list of the 10 Hottest Artists in Nigeria by NotJustOk.

No doubt, Teni is enjoying 2019 with performances in and out of the country and her funny video skits that keep her on the lips and phones of Nigerians everywhere. She was recognized as YouTube Music‘s Trending Artist on the Rise in 2019 and was also featured by Google in their 2019 International Women’s Day “Women Will” initiative. The talented singer was recently nominated for the Best  New International Act Award category in the BET Awards alongside Sho Madjodzi from South Africa.

They gave us lovey dovey celebrity wedding earlier in the year, and the secrecy and surprise made it even more fun. The artistes tied the knot in a lowkey-planned wedding ceremony that only 300 people got to attend which made their names on everyone’s lips. Shortly after the secret wedding, they released a music video titled Promise which bring clips and a peek into their beautiful wedding ceremony. Simi recently released her album titled Omo Charlie Champagne to rave reviews while Adekunle Gold’s Before You Wake Up got everyone falling in love. Talk about a winning couple!

Mavin Records is a Nigerian record label founded by renowned producer and recording artist Don Jazzy. The label is home to recording artists such as Korede Bello, Dr SID, D’Prince, Di’Ja, Johnny Drille, Poe, DNA Twins and Rema. Although the label witnessed the exit of their top performing artistes such as Reekado Banks who started his own record label and Tiwa savage who signed a recording contract with Universal Music Group, Mavin Records is till on top. In January 2019, the label signed a multi-million dollar equity investment global strategic partnership deal with Kupanda Holdings. Followed by this, was the  signing of Rema to the group  by March 2019. Rema’s debut EP has got the whole nation and some of the continent talking with the hit tracks like Dumebi and Corny ruling the airwaves. Rema also recently recorded a song with D’prince titled Lavida, and Korede Bello is back with a hit track, Mr Vendor. Mavin Records still remains one of the top record labels in Africa.

There’s our list.. however, it’s only May, so there is a lot more ground to cover. Will these artistes reign supreme at the end of the year when we bring the biggest winners for 2019 overall? Like the popular saying, it is not how far but how well. We look forward to seeing the marathoners, the Nigerian entertainers who will stay the course and rise to the top like cream. No Pressure! 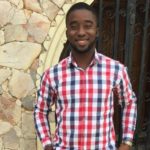 Agbaje Omoniyi covers Lifestyle, Entertainment and Living at Glazia Magazine. A graduate of the University of Lagos with a degree in Zoology (Environmental toxicology major), Omoniyi’s passion for writing can be traced to his time at university where he spent a significant period working on several review articles as an Ecotoxicologist and also as a social media expert. Connect with him on Twitter.

How to Market Your Skills and Standout in a Noisy World

Man United loses to PSG as Ronaldo joins 750 club & Other Exciting Sport Updates in Mid-week Round Up.