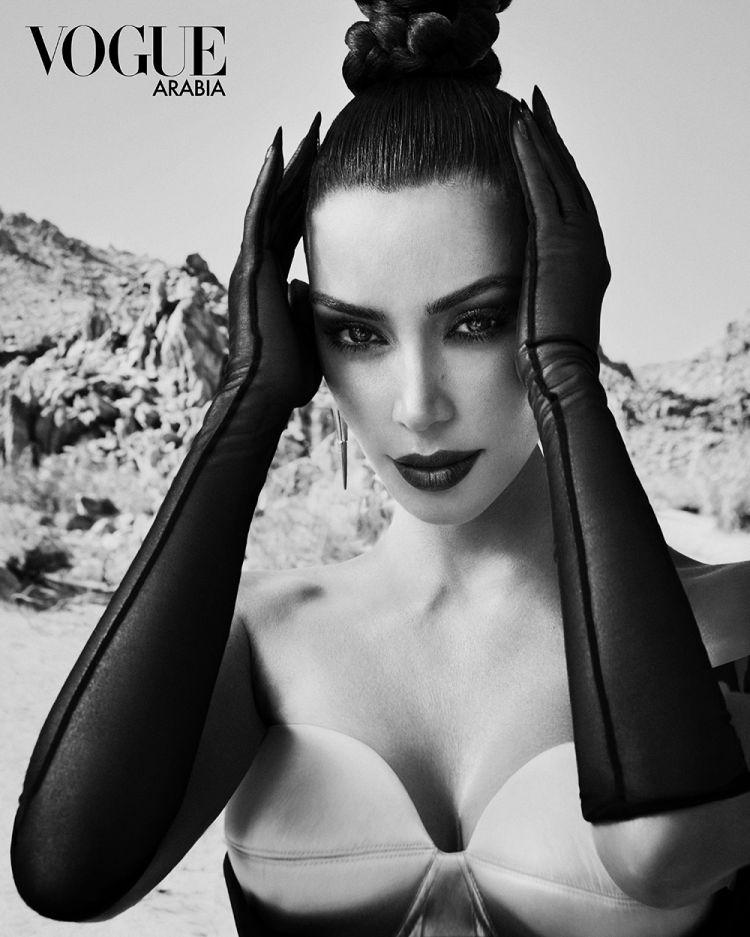 Kim Kardashian West covers the September issue of Vogue Arabia and we can’t help but oooh and ahhh at the beautiful photos and highly fashionable looks. What we loved most about the shoot though is the fact that for her cover interview, Entrepreneur, TV-reality star and trendsetter; Kim Kardashian West was interviewed by her husband; Grammy award-winning Rapper, Fashion Mogul, Kanye West.

“Vogue Arabia Editor-in-Chief Manuel Arnaut “Her interview with Kanye West is both real and raw, as she talks personally about her career and family life. It was inspiring to assemble this unique level of talent.” he added.

“For a magazine that is still barely two years old, we were both thrilled and honored to also have Thierry Mugler and Kanye West taking part in this issue,” A delighted Arnaut continues. “The star power reinforces the work of Vogue Arabia in delivering striking, groundbreaking content to our audience, both regional and global.”

In the interview between the couple, Kardashian West revealed sensitive information about herself that even her fans are unaware of. According to Arnaut, “The shoot and interview reveal a side to Kim Kardashian that many have never seen before.”

“I do agree that fame can be addictive… Money was always the goal but I was obsessed with fame, like, embarrassingly obsessed”

“I try to be a good person and to take my mistakes and make them into a better experience — to learn and grow from them and move on.”

“I think this year has been a really strong Kim and Khloé year; I’m obviously so close with Kendall and Kylie too but I’ve spent so much more time on this earth with Kourtney and Khloé – 16 and 17 years longer with them. Kourtney and I will always be really close, but this year, Khloé and I really bonded”

“People have shared with me over the years how much it has helped them to feel less alone when dealing with their own adversity.”

“Even in my darkest of times I don’t regret putting myself out there for the world to see. I love having a voice and I appreciate the platform that I have been given”

“I was like, ‘Damn, why did I waste so much time and energy? Why didn’t I do this sooner?’”

“There is a misconception that I don’t actually have to study and that I’ve bought my way into getting a law degree – that’s absolutely not true… Being underestimated and over-delivering is my vibe.”

Meek Mill may have Lori Harvey on his wish list but for Kim Kardashian West, she says: “I do wish I could have more privacy at times.”

“My focus has shifted a lot. I’m at this place now where I am not concerned anymore about fame, but if you would have asked me this question 10 years ago, I probably would have said that fame and money were of equal importance.”

Full interview will be published in the print issue of Vogue Arabia (money-forward move)!

LIFE HACK | 7 Ways to Simplify Your Life and Live Happier