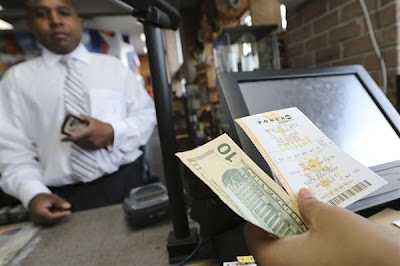 somebody scream Jackpot!!
A single winning ticket was sold for the $400 million Powerball drawn Wednesday — one of the biggest prizes in the multi-state game ever, lottery officials announced early Thursday. The one grand prize winner was purchased in South Carolina with the numbers 7, 10, 22, 32, 35 and a Powerball of 19.
The ticket holder can claim an annuity valued at $400 million or take a lump sum in cash of $223 million — about $134 million after taxes, officials said.
The lucky ticket was sold in Lexington, according to South Carolina Educational Lottery Executive Director, Paula Harper Bethea. The town’s population is said to be just under 20,000 (wow!).
A press conference was planned for 11 a.m. ET Thursday at the store where the ticket was sold, a Murphy USA on Augusta Road. officials advised the winner to “sign the back of the ticket, put it in a safe location, seek financial or legal advice from a trusted source, and then come forward to claim the ticket.”
The officials’ advice reminds me of the Bow Wow movie, The Lottery Ticket, if you have seen the movie, you know how it went down (hahahaha). Can you imagine how the owner of that ticket would be feeling right now?! Let’s say you owned this ticket, what will you do and what will be your choice? ($400 million annuity or take a lump sum in cash of $223 million?)
some part of this story was originally written By M. Alex Johnson, Staff Writer, NBC News
Previous Article

FOOTBALL: IS THE SPECIAL ONE LOSING IT?