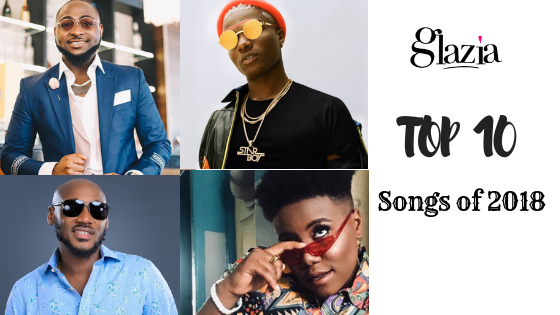 How do you choose the top 10 songs of 2018? Who made these songs? The Nigerian music industry keeps leading the pack in African music and have remained steadfast in exporting our music to the rest of the world. From artistes like 2Baba to Wizkid, Davido, Olamide, Tiwa Savage, and many more, it has been from one hit song to the other over the years. We’re just days through 2018 and it won’t be right to leave this year without giving accolades to the songs and artistes that kept us going. However, some songs deserve more accolades as they’ve maintained a steady place in the top charts through the year and still get us dancing in glee when they come on air.

This list was a tough one to create by the team who worked on it as there have been so many hot jams this year. Nonetheless, the task was to pick the best of the best; using the criteria: Rotation in radios, clubs and parties; chart placements; quality of music and mass appeal. While we understand that there can never be a perfect list, we present to you the top 10 hottest and biggest songs of 2018. Drum Roll…

Assurance by Davido aka OBO was released on the 30th of April to celebrate his girlfriend, Chioma (Chef Chi). This hit single produced by Speroach Beatz grew to become more than a song; some people started adding it to their prayers. It drove the conversation on and offline and was a trending topic and buzz word for months! Not to forget Davido’s worldwide tour where fans from all over the world are seen screaming with excitement when the beat comes on. Till date, businesses and individuals still use the word assurance to sell their market and when the song comes on, it is accompanied with a big shout of joy!

Soco marks the first time Wizkid opened up his platform to upcoming artists (Ceeza Milli, Terri and Spotless) and this proved to be a great move. It was released on 20th of February off his forth coming EP, Made in Lagos. Produced by NorthBoi, Soco is a song full of vibes and is abundant with melodies… the song gets everyone moving their feet following Wizkid’s killer first verse and catchy chorus. Starboy’s newest artist, Terri makes a solid debut on the song’s second verse, followed by Spotless and Ceeza Milli, who both deliver as well. The song made every DJ’s playlist and is a club banger, raking in great numbers in views and downloads from Spotify, iTunes and YouTube.

This hit track was definitely a trend setter as it gave the name “Amaka” a whole new meaning. It was released on 27th of June and was produced by Speroach Beatz. ‘Amaka’ tells the everyday story of the average Nigerian guy, a tale of ‘been there, done that’, it is easily relatable. This addictive song was no doubt the biggest song of the summer as it got everyone singing at the top of their voice with passion to the popular catchphrase Amaka disappoint me.  There were several covers and versions of the song as well, if that is not legendary song status, we don’t know what is.

If you ever doubted that Olamide was king of the streets, Science Student came to clear all doubting Thomases and cement the singer and record label owner as the undisputed king of the streets. Released on 11th of January, the song was produced by Bbanks and hit maker and frequent collaborator, Young John. This song got everyone on the street, off the street, in the office, at weddings, on the gram etc. giving their best “Shaku Shaku” dance steps, while mumbling “kosewe kosi egbo”.

Burna Boy is known for releasing unique songs heavily influenced by the legend Fela. 2018 was Burna’s year and he definitely blessed us this year with his album “Outside” which is filled with amazing hit jams, one of which is Ye. Released  in January, 2018 and produced by Phantom, Burna Boy let the quality of the song speak for itself. And then months after its release, the song was brought back to the charts and made even bigger thanks to Kanye West who named his album “Ye”. So, when people all over the world went in search of Kanye’s album, they found Burna Boy’s gem and everyone fell in love all over again! And the song lived happily ever after and is still ruling the radio waves.

Legbegbe is one song that got everyone talking and doing the shaku shaku dance move. This Shaku shaku certified song was released on 4th of January and was produced by Mr Real himself.  This hot banger quickly became the anthem amongst Nigerian youth as it made its way to clubs, broadcast stations and parties. Even the people in the deep villages rock to this song.

Duncan Mighty is another artiste who has had an amazing 2018. The Port Harcourt first son returned to the limelight with this hit single featuring Wizkid. Fake Love gradually crept into the minds of Nigerians and got everyone talking about Duncan Mighty; requesting for collaborations from the singer left right and center. Released on the 18th of May, the song was produced by killer Tunes, who is responsible for a good number of the jams we’ve enjoyed this year.  This hit song is still receiving rave reviews and still gets everyone singing along whenever it is played on radio, television or in the club.

This song definitely blew our “minds” away and got us all caught up in our feelings! This is what you get when four big artistes; Davido, Mayorkun, Dremo and Perruzi come together to release a hit single. Mind by DMW got everyone singing along from the release date. The track was released on 31st of January and produced by Fresh. Mind came with a lot of vibes from the DMW boss down to their new signee. No Easter party was done without this song, from one radio station to the other, Mind was ruling the airwaves and remains consistent on people’s playlists and DJ mixes. Of Davido, Mayorkun, Dremo, Peruzzi, who would you say had the best verse on Mind?

Like the catchphrase “sebi you want banger to banger?”, Baba by DJ Spinall featuring Kizz Daniel proved to be one of the most banging songs this year. Released on 27th of April and produced by Killertunes, Baba is a confident song that talks about the prowess of the artistes. DJ Spinall continues to prove that he is one of the best at this hit-making game as he previously released hit track, Nowo featuring wizkid. Kizz Daniel also has always delivered hit songs and this made the combo of the artiste and DJ Spinall a match made in music heaven.

The Dr Dolor entertainment music diva, Teni came through with a new Afro pop hit single “Askamaya” which got everyone dropping their best dance steps. Produced by Spellz, this song was released on 12th of May after her single “Wait” alongside “Lagos”. Teni has remained consistent even after winning the “Rookie of the year” awards at the Headies 2018. You may not even know the song title but you cannot deny that Askamaya got you rocking. Askamaya not only had an effect on the listeners but it also rocketed Teni to new heights in her career.

These are songs that were big in their own rights and brought Nigerians so much joy. They may not have made the top 10 list(there can only be 10), but they deserve to be mentioned for how successful and solid they were.  In no particular order:

How Chief Daddy Movie is Holding the Box Office Ransom

Mid-Week Sports Update You Should Know this Year.