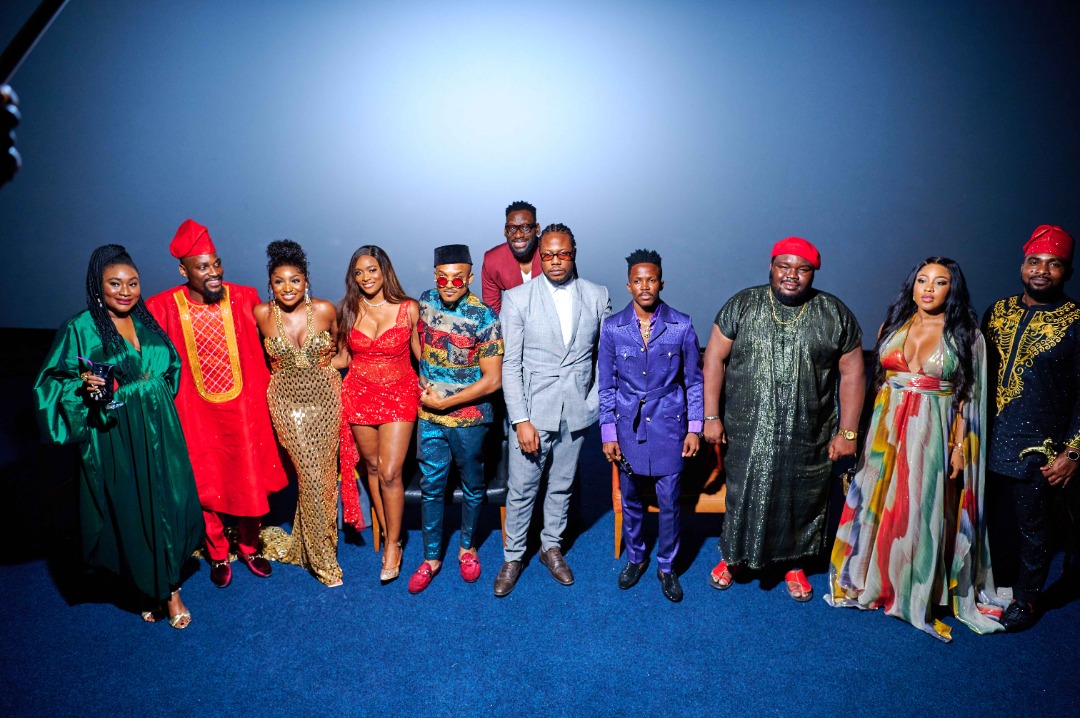 Sunday night I went to the IMAX Cinema in Lekki ready to enjoy an evening of celebrity spotting and Nollywood magic. Inkblot Productions was premiering its first film of 2022, “The Blood Covenant”. I was super pumped about The Blood Covenant movie especially when I saw that Tobi Bakre was part of the cast and playing a lead role.

The Blood Covenant is a film that explores themes like the evils of money rituals, greed, peer pressure, and corruption and features some of the biggest names in Nollywood including Ufuoma McDermott, Shawn Faqua, Uzor Arukwe, Erica Nlewedim, Alexx Ekubo, Omowunmi Dada, Shalewa Ashafa, Gregory Ojefua, Chimezie Imo, and others.

While the red carpet was filled with glitz and glamour, I was seriously looking forward to entering the theater and finally seeing the movie that has been all the rave on social media.

Before the film started, all the cast and the director came up on stage to say a few words. This was also one of my favorite parts. Having the co-founders of Inkblot Productions Zulumoke Oyibo and Damola Ademola specially announce the director and members of the cast, and then having the director of the movie, Fiyin Gambo personally introduce the film before the screening. It also helped that we were close to the front too with the cast literally a few feet away, so it felt really special.

I was so engrossed and blown away by the film, I left the screening with my popcorn and sprite untouched. The movie playing on the big screen got my full attention from the very first minute. For someone who likes skipping scenes and jumping to the end to see what happened before continuing the movie, this was a totally different experience.

I was holding my seat in equal parts anxiety and anticipation because the first few minutes were beyond brilliant.

The cast was on their A-Game

You know when God said in Genesis “Let there be light” and there was light? Shawn Faqua probably said those words when he held the script and was told to play Osiano because he acted the heck out of that role, brought life to Osiano and made me speechless till the end of the movie. Give Shawn Faqua all the awards he wants!

Tobi Bakre brought his A-game and Uzor Arukwe also put up a breathtaking performance. With his acting, Chiemzie Imo said “I’ll be the best character named Advantage you have ever seen.”  Even though he didn’t feature in a lot of scenes, Alexx Ekubo bodied his role. Then let’s talk about his introduction to the movie where he played the character Obi. Nobody is forgetting Alexx Ekubo’s entrance anytime soon, the best character introduction in Nollywood history perhaps?

Erica surprised me the most. I was like wow! The director definitely knocked her out of her comfort zone and got her to show us the real reason why she is called Star Girl. To me, this is the best acting I have seen from Erica in any film yet. Omowunmi Dada was brilliant as always, interpreting her role to near perfection. Shalewa Ashafa and Gregory Ojefua also gave what they were expected to give with their performances. Ufuoma Mcdermott embodied a scary detective with no personal life to a T. Talk about a perfect ensemble cast!

The Blood Covenant is a great movie, exceeding my expectations and definitely lives up to the hype that had surrounded it on social media

Every single moment in the movie was suspense-packed, making you want to see the next scene immediately. The way they managed to slide in some comedy, the banter between the boys and the pidgin that they spoke, everything felt so real and so true. I kept saying, this is our reality.

The dialogue, plot, picture quality everything is top tier. Will I be watching The Blood Covenant Film again when it hits cinemas on the 15th of April? YES PLEASE.

The director Fiyin Gambo deserves a standing ovation. The writers, Chiemeka Osuagwu and Naz Onuzo should also get their flowers. And if there is anywhere that someone can pledge allegiance to only watch only movies made by Inkblot Productions, Sign me up!

P.S Shawn Faqua should be given a raise because what?!!!!!

The Blood Covenant follows the lives of Eddy, Jite, and Osiano, three ambitious young men in their late twenties struggling to make it in life. Tired of being looked down upon, they embark on a relentless quest for the high life, chasing easy money, fast cars, and fame; willing to do whatever it takes no matter what it costs them. The Blood Covenant is by Inkblot Productions in collaboration with FilmOne Entertainment and arrives cinemas nationwide on April 15.

The Impact of Collaboration in the Nigerian Fashion Industry

Review O’Clock! Here’s What Viewers Are Saying About The Set Up 2 Movie!