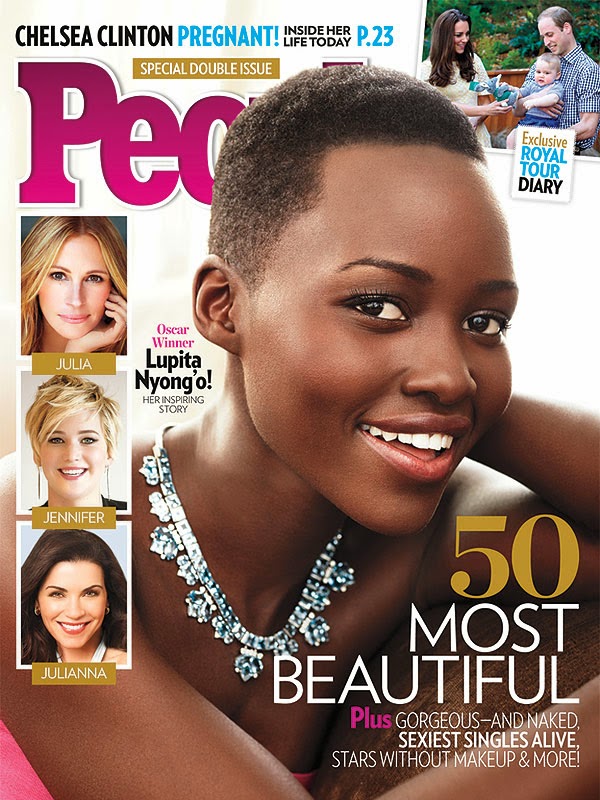 Saying Lupita Nyong’o is having a fantastic year will be putting things mildly. Since the release of the Oscar winning movie, 12 Years A Slave; Lupita has become the darling of the world and America’s own sweetheart.
From winning an Oscar award, ruling the fashion world with her impeccable style to clinching her first major brand endorsement with Lancôme, Lupita has been a constant feature on major newspapers and magazines around the world.
On Wednesday, Lupita achieved a major milestone when she was named The World’s Most Beautiful Woman of 2014 by People Magazine. Just like that, a young girl from Kenya who was able to grab the opportunity is living her dream. With just one movie, Lupita has achieved Hollywood stardom that many who have been in the industry for years can only dream about.
In a time where skin bleaching is at an all-time high, Lupita being named world’s most beautiful woman is definitely a boost for the dark-skinned ladies. Hopefully, we will see more dark-skinned models on top fashion runways, as lead actresses in big budget movies etc.
This should also be a wake-up call to everyone who thinks that beauty is a one size fits all. Beauty goes way beyond the color of your skin and every woman out there whether white, black, blue, purple, slim, chubby, round faced, oval faced whatever is beautiful.
In the words of the Backstreet Boys: What makes you different makes you beautiful.  Embrace your difference, that’s what sets you apart.
Previous Article

DAVID MOYES: THE END OF A COSTLY EXPERIMENT

WHAT IF NIGERIA BREAKS UP…?