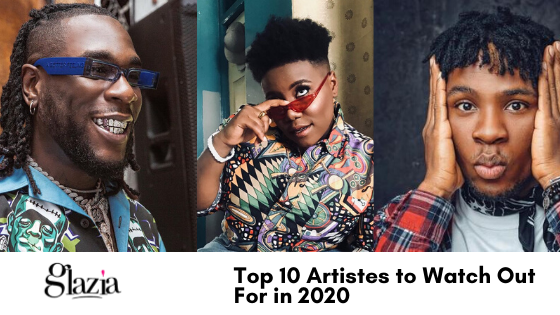 New year, new goals right? So, who are the artistes to watch out for this new year? Who are the ones with potential to take the music industry to even greater heights? 2019 was indeed a great year for Afrobeats and Afro-fusion. Burna Boy’s music finally got the International acclaim it deserved. His brilliant body of work African Giant was nominated for the “World Music Album” category at the Grammys. Teni got everyone believing they could be billionaires. Davido stole our hearts with Risky and all the other amazing songs in his sophomore album, A Good Time. From Brown Skin Girl to Joro and more, Wizkid remained in the spotlight all through 2019. Now that we are on month two and have gotten a little feel of the New Year, who are the artistes to watch out for this 2020?

From the newbies on the block to the semi-OG’s and in no particular order; we’ve curated the top 10 artistes expected to rock 2020.

Rema’s breakthrough began after signing with Da Prince’s Jonzing World, an imprint under the Mavin Record Family. Since taking that bold step, Rema (Divine Ikubor) hit the ground running with his first body of work REMA EP. His hit tracks include Dumebi and Iron Man which Barack Obama listed in his 2019 summer playlist.  The 19 year old has been able to draw  younger audiences to his unique sound -Afrobeats Trap. Rema has positioned himself as the face of this new breed of music which has satisfied a lot of teenagers and millennials to build a cult-like following. He has already acquired accolades such as The Headies- “Next Rated award”, AFRIMMA Awards for “Video of the year”, City People Music Award for “Revelation of the year” all in 2019 alone. Last year ended on a high for him when The Fader featured him. This is a platform that huge artistes like Davido, Drake and Ariana Grande have shared in the past.

Teni capped off a brilliant 2019 with the Billionaire EP. This was after releasing hit singles such as Case and Uyo Meyo. Teniola Apata had us all hooked and stayed top of mind the entire year with her songs and funny videos on social media. She is presently one of the “most sought after” artistes in Nigeria. At the 2019 Headies Awards, she bagged 4 awards – the Viewer’s choice awards, Best vocal performance (female), Best pop single and Best recording of the year. The thing about her kind of music is that it creates a buzz and stays around for long. Billionaire has been one of the most played songs in clubs and on the radio since it’s release till date. Just when critics say she is not going to be around for long, she releases a song that silences the naysayers. She has promised to deliver more music and has confirmed that an album is in the offing.

Joseph Akinfenwa Donus musically known as Joeboy, serenaded us with some of the biggest hits of 2019.  Joeboy was the first artiste to be discovered by Mr Eazi’s “Empawa Africa initiative”. His breakout single Baby took over the airwaves not just in Nigeria but all over Africa, topping Apple Music’s streaming charts in Nigeria, Uganda and Zimbabwe along the way. The Human Resource Graduate from University of Lagos has since dropped other hits such as Beginning and Don’t Call Me Back featuring Mayorkun. Joeboy’s unique Afro-pop and sonorous voice is one that will no doubt make him a front runner and one of the artistes to watch out for in 2020.

Adedamola Adefolahan popularly known as Fireboy DML, took the industry by the storm in 2019 after his breakthrough track, Jealous. The song took over the airwaves and became one of the most popular songs in the country. The talented vocalist and composer describes his genre of music as Afro-Life. His debut album, Laughter, Tears & Goosebumps which was released under the YBNL record label topped the Apple Music streaming charts for weeks after its release. The album has proven his ability and dexterity as his approach to the Afrobeats sound is distinct and unique. His music crossed the shores of Africa and has been widely acclaimed all around the world with stars like Ciara and husband, Russell Wilson vibing to it. Liverpool FC stars Virgil Van Dijk and Gini Wijnaldum took to their twitter accounts to praise him for a very brilliant album. He definitely is a one to watch out for in 2020.

Afeez Fashola popularly known as Naira Marley burst into the limelight after the release of hit track Issa Goal in collaboration with Olamide and Lil Kesh. The song served as like an anthem for Nigerians during the Russia 2018 FIFA World Cup. Earlier in the year “The Marlian President” was arrested for internet fraud-related issue, by the Economic and Financial Crimes Commission. This was after his hit single, “Am I a yahoo boy?”. The EFCC debacle rather than dent his brand, propelled his career and made him even more popular. After he was released on bail, he released two tracks Soapy and Opotoyi which tripled his fan-base. Naira Marley’s fan base is huge. They are called “Marlians”and they show up en-mass for his shows and appearances. His appeal is not limited to the young one; senior celebrities, public figures etc have all come out to declare themselves members of the Marlian family. With his viral success, brand appeal and sold-out concerts in Lagos and London respectively in late 2019, Naira Marley is definitely one of the artistes to watch out for in 2020.

David “Davido” Adeleke is probably one of the hardest working artistes around. He has grown to be a very influential ambassador of Afrobeats. His hits If and Fall have been received with critical acclaim all over the world, gone platinum and stayed on the Billboard World chart for weeks and weeks. As of January 2020, Fall was the most viewed music video on YouTube. His new album “A Good Time” which was released late 2019 is still the talk of the town. it has ever since received massive air  play across the country. The album has already crossed 110 million streams (110,146,887) as of January 2020. With his consistent ability to churn out hit after hit, international tour dates and so much more, the founder of DMW Records is going to remain in our faces with the promise to cross more borders this year.

Wizkid has made it known that he will release his highly anticipated album, Made in Lagos this year and we can’t wait for it. Wizkid had an amazing 2019; His feature with Beyoncé, Brown Skin Girl on her Lion King inspired album, The Gift was a perfect recognition for someone who has come to be known as the face of Afro beats.

The album which also featured Burna Boy, Tekno, Yemi Alade and Mr Eazi was nominated for the Grammys. Also, Brown Skin Girl has been nominated for “Outstanding Duo, Group or Collaboration” at the 2020 NAACP Image Awards. Wizkid is the first Nigerian artist to be nominated for an NAACP Image Award. His newly released EP – Sound Man released earlier this year, has received massive airplay and acceptance across the country. Wizkid has also sold out the O2 Arena in the UK for two successive years. You best believe that this Superstar is going nowhere anytime soon!

Tiwa Savage is undoubtedly Nigeria’s Afrobeats queen. She has already begun 2020 by performing at the Sir Lucian Grainge’s 2020 Artist Showcase. The annual event featured performances from Universal Music Group’s hottest, established and breaking talents. The exclusive show marked the beginning of a huge year for Tiwa Savage who will release her album globally through Universal Music Group this year.

In May 2019, Tiwa Savage signed an international recording deal with Universal Music Group. The deal marked the end of her seven years contract with Mavin Records owned by renowned producer, Don Jazzy. In 2018, she made history by being the first female to be awarded the Best African Act at the MTV European Music Awards.  “My biggest goal is to make Africa proud. I’m so excited for this moment and I’m thankful to Sir Lucian Grainge and my new UMG family for their belief in my dreams. “I’m looking forward to this next chapter in my career and I’m more ready than I have ever been.” Tiwa said following her UMG deal in 2019, and 2020 looks be the year she reaps all the benefits of her global deal.

Damini Ebunoluwa Ogulu coming from his Grammy nomination has convinced doubters that he is here to stay. He has a song with Wizkid in the works and judging from the snippets and hints from insiders, it looks like it is going to be a major hit. His international tour is still progressing and the music star is set to anoint other continents with the gospel according to Burna Boy.

In true Burna Boy fashion, he is set to release more hits and we expect him to score some more international collaborations this year. He was featured on Stormzy’s newest track – “Own It” with Ed shearan and the song is still topping the charts in the UK. With winning some of the biggest awards at the SoundCity MVP awards held this January and more, Burna Boy’s 2020 got off on the right footing and we expect him to gift us more hits from where the African giant album emerged.

Mama Africa as she is fondly called is one of Nigeria’s leading female music superstars. She has a huge following on the African continent especially in Francophone speaking countries. Over the past 12 months, she has expanded her reach to a more diverse and global audience.

Her latest body of work, Woman of Steel, featured the likes of Angelique Kidjo, Rick Ross and Duncan Mighty. Yemi Alade has always been the one to tour the world and give energetic performances at music festivals and making cool cash! We expect her to continue in this tradition while also churning out hits with international acts going by her increasing global recognition.

We cannot deny the brilliance of DMW’s Peruzzi and Mayorkun who are not just great performers but also solid song writers. 2Baba will always be here as he’s successfully cracked the code of how to consistently stay relevant. The veteran musician creates at least one major hit music per year and his following is unwavering.

How Can You Maintain Your Freshness? | Here are 4 simple ways