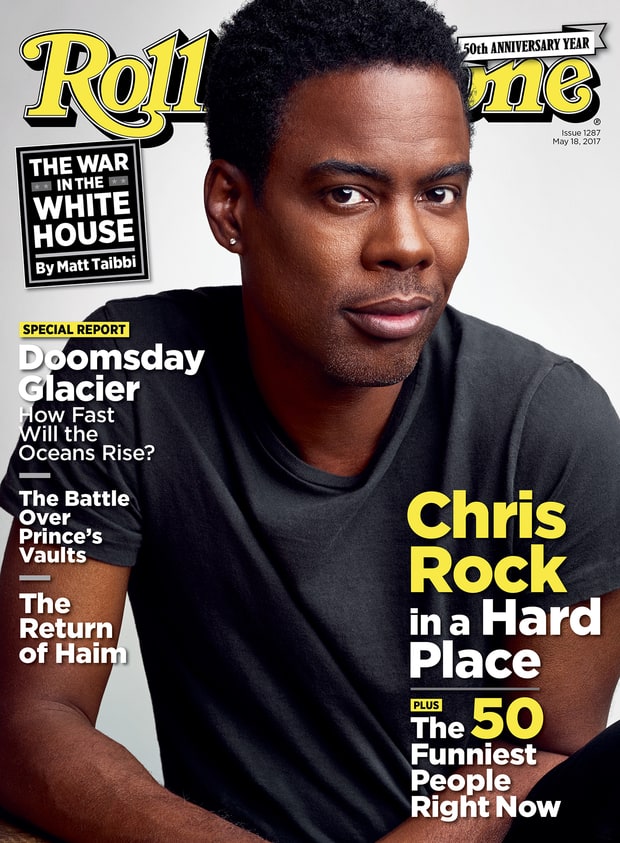 Comedian, Actor, Writer and Producer, Chris Rock stars in the latest cover of Rolling Stone magazine and his cover story is quite interesting. Interviewed by Rolling Stone’s Mark Seliger, Chris Rock candidly discussed how infidelity, divorce and soul-searching fueled his bold new stand-up tour and a chance to start over. We picked out 10 of his most powerful quotes on just about everything from the interview… see below:

2. On the 2016 US Elections and How He Knew Trump Would Win – Rock delivers a well-reasoned argument about how “of the moment” candidates like Barack Obama and Trump always beat the “it’s my turn” candidates like McCain and Hillary Clinton. “Presidential politics is like show business, it doesn’t give a fuck – ‘Whoever’s hot,'” says Rock in a mocking tone. “‘Ooh, you paid your dues. We don’t give a fuck. Migos has the Number One record, fuck you.'”

3. On Having A Breakdown After His Divorce – “I never had one,” says Rock. “Getting divorced, you have to fucking start over. You get to reset. It’s not a breakdown, but something in your life broke down.”

4. On Finding Peace With His Divorce –  “You might have caught me just coming out of court,” says Rock.  “I asked myself, ‘Do I want to be angry for a year?’ It’s not a cool place to be. It’s not healthy. I’m not Sam Kinison – I loved Kinison, but that’s not where I want to hang out every night.”

5. On Marriage – “Would I ever get married again? Not if it would cure AIDS.”

6. On Black Parents Raising Sons – “You have to physically show them – the consequences of not listening to your parents are death,” he says. “It’s death. This is not a joke. I was in Bed-motherfuckingStuy.”

9. On Racism – “I literally get treated like a nigger a few times a day. I can’t imagine what it is like for my brothers and what they go through every day.”

10. On Emotions – “We live in a world where men are assumed to not have feelings. All my friends assume I moved into the city after my divorce, away from my girls. When I say I bought a house around the corner, it blows their minds.”

Shakespeare VS Kanye West: Debate Results Are In