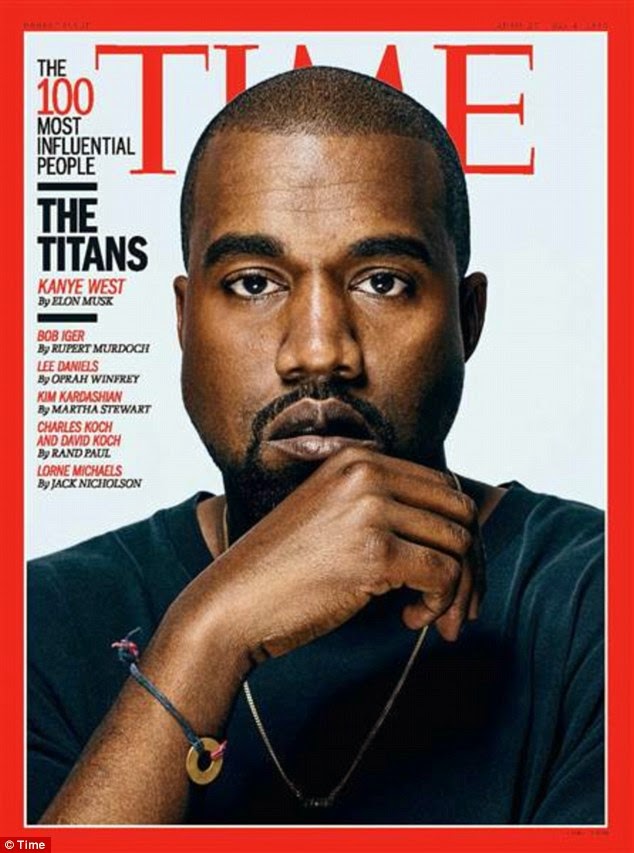 The TIME 100 list which is now in its 12th year, has grown to become more than a stamp of approval to people making waves in the different industries of the world today. Out of 7billion+ people in the world, TIME picks out 100 most influential persons  and put them on the list for their achievements and influence or perceived influence
Now, to have 2 people from the same family on this list, is a pretty big deal so we say congratulations to Kim and Kanye West for another coup together (remember their Vogue cover?)Kanye also nabbed one of 5 special Time 100 covers where he is described as a boundary breaker.
“The dude doesn’t believe in false modesty, and he shouldn’t. Kanye’s belief in himself and his tenacity,got him to where he is today” – Elon Musk, CEO of SpaceX and Tesla Motors writes about Kanye.
Speaking in his Time interview, Kanye says he doesn’t care about having a legacy and being remembered but cares  about what he can do with his voice and how he can make life easier and “doper” for the kids. The rapper who says he wanted to be a video game producer when he was younger, credited his success to his parents who supported him and allowed him to dream.

“The one thing that makes magic, Magic is the fact that no one believes it is possible” – Kanye West

POOR BRAND SERVICES: The Rotten Lemon Awards On The Prowl