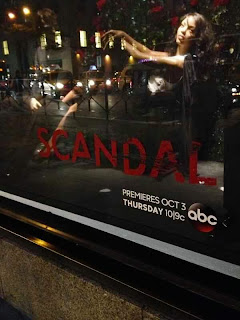 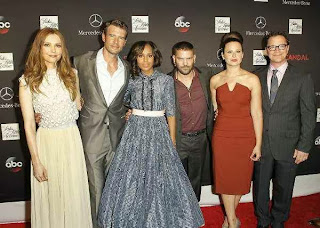 The Scandal cast (Kerry Washington, Scott Foley, Guillermo Diaz, Katie Lowes, Darby Stanchfield and Josh Malina along with creator and Executive Producer Shonda Rhimes, Executive Producer Betsy Beers, and Lyn Paolo) came out  for the unveiling of mannequins inspired by their characters in the windows of Saks Fifth Avenue.

The SCANDAL ladies represented by looking really stylish. “It’s thrilling,”said Kerry Washington,(who plays the lead role, Olivia Pope) “When I landed at 1 in the morning I came straight here from the airport because I was dying to see the final product from all these phone calls and brainstorming sessions, and it’s really thrilling.”
Co-star Darby Stanchfield shared a funny story about how she found out about the promotion: “My hair stylist on the show said, ‘Um, babe, we need to cut an inch off your hair because they’re going to match a wig. I was like, `What’s this for? Who’s making a wig of my hair?'”

Katie Lowes who was looked real chic in a strapless number, said she is just thrilled to be a small part of Scandal and is pleased that the show is making fashion statements. 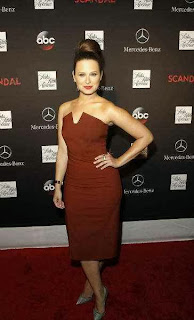 The display,which also shows at Saks locations in Beverly Hills and Chevy Chase, Md., will showcase designers whose fashions are worn by Washington’s character Olivia Pope, including Giorgio Armani, Donna Karan, Calvin Klein, Michael Kors and Carolina Herrera. The display which were initially scheduled to last till Friday, will be extended until Sunday an excited Kerry Washington tweeted today.

Most importantly, Scandal season 3 premieres tonight! (Oct. 3) at 10 p.m. EDT.
(or the early hours of tomorrow for some people.. wink). If the stars are to be believed, which I think they should; we are in for some jaw dropping moments. I am totally excited!