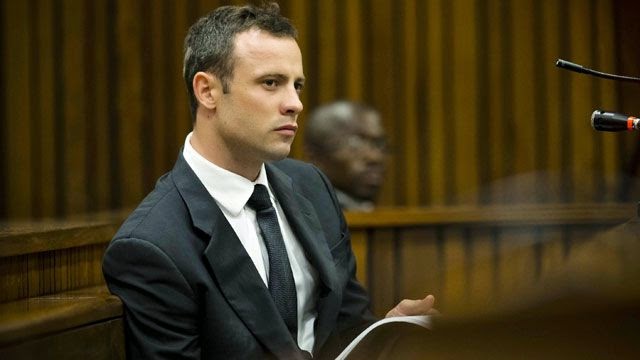 A very emotional day in and out of the court as we get very close to a verdict for what has been dubbed the trial of the decade involving paralympian, Oscar Pistorius. The Judge, Thokozile Masipa has declared that the athlete cannot be found guilty of the premeditated murder of his girlfriend Reeva Steenkamp, it emerged in the North Gauteng High Court on Thursday morning.
“The evidence before this court does not support the State’s contention that this could be dolus eventualis [legal intent],” Judge  Masipa said. “The accused therefore cannot be found guilty of murder dolus eventualis… that however is not the end of the matter as culpable homicide is a competent verdict,” she added.
According to CBS News reporter, Deborah Patta who has been covering the Oscar Trial , “Many criminal lawyers in court today, shocked at the reading so far – one says that the Judge has made an error in law” she wrote in a tweet.
“The State has not proved beyond reasonable doubt that the accused is guilty of “premeditated murder. There are just not enough facts to support such a finding.” Judge Masipa said.  The court ruled that the evidence with regard to the murder charge was “purely circumstantial” she said.
Returning from the lunch break, the judge decided to deal with the issue of negligence on the part of the accused:
“There was no explanation why the accused didn’t call security before arming himself and going to the bathroom. He could have run to the balcony and called for help like he did after the incident. The conduct of the accused could be explained by looking at his past. But that does not excuse his conduct” Masipa said.
“Many people suffer from crime but not everyone sleeps with a firearm under their bed. I’m not persuaded that a reasonable person with the same circumstances would have shot into the cubicle. The accused knew there was a person behind the door, he chose to use his firearm” Judge Masipa continued.
In what seems to be leaning to a “Culpable Homicide” verdict, Masipa adjourned the court for the day by concluding  “The accused failed to take any steps to avoid the resulting death. He acted too hastily and used excessive force. The accused was negligent”
Popular opinion is that the situation would have been different if the South Africa had a Jury system.  Let’s see what tomorrow brings with a verdict for Oscar Pistorius. The Justice system of South Africa is under very close scrutiny by the world with this case.
Previous Article