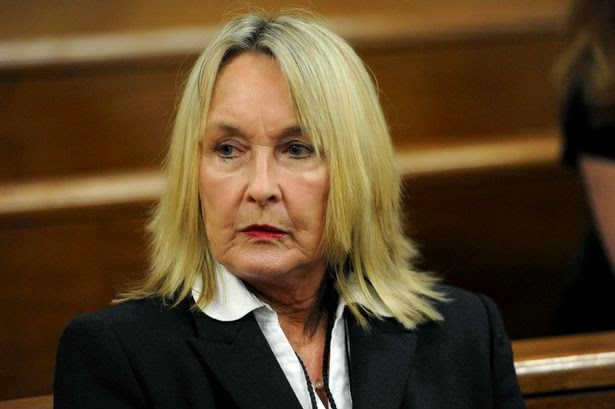 On Wednesday the 9th, during the gruelling cross-examination of Oscar Pistorius by South African prosecutor Adv. Gerrie Nel, a photo of the dead Reeva Steenkamp was shown to Oscar by Nel in court. In the photo which was picked by the media, showed Reeva’s blown out head with brain tissue all over the place .

People wondered how Reeva’s mother, June Steenkamp was able to hold her own and not fall apart in  court when the photo was shown and all though the questioning when Reeva’s wounds and death were being described.
This morning as she arrived the court house for today’s proceedings, she spoke with UK paper, The Daily Mirror and told them that Oscar’s apology (coming 14 months after Reeva Steenkamp’s death), left her unmoved. June tells the paper: I cry for suffering and agony my darling daughter went through and because I will never have her again.

He did eventually look at me,my presence unnerves him, I’m sure of it. He’s answerable to me,June says of Pistorius. He must see me there in the court, he must feel my eyes boring into him, I think it makes a lot of difference. Although it was reported that June when asked,told journalists in court yesterday that she was pre-informed about the photo that was shown, she tells the paper that photos of Reeva “wiped her out”.

I will see that picture for the rest of my life until the day I die : I’m there for her, as much as it’s hell for me, I know that I have to be there, I’m compelled to be there. – June Steenkamp

TECH ABOUT IT: SAMSUNG GALAXY S5 AVAILABLE IN MORE THAN 130 COUNTRIES TODAY