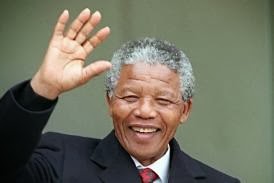 Having been sick for some time now, World leader Nelson Mandela’s death can be said to have been expected. Nonetheless, it still came as a shock to the world at large when Nelson Mandela died on Thursday 8.50pm CAT.

The South African President Jacob Zuma who confirmed the news said:
“He is now resting. He is now at peace, our nation has lost its greatest son. Our people have lost a father.”

Hilary Clinton puts it succintly : “Nelson Mandela was a champion for justice and human dignity, with unmatched grace. I’ll remember him as Madiba, truly an unconquerable soul.

President Zuma called mandela’s death “The moment of our deepest sorrow”.
Nelson Mandela was 95 years old, he will forever live in our hearts. Rest in Heaven great man.
Previous Article

THE EXPERIENCE 2013: HEAVEN ON EARTH