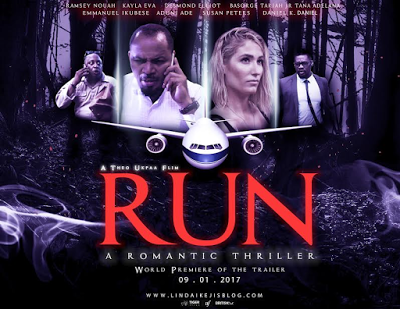 RUN dramatically tells the story of two people from opposite backgrounds whose lives become entangled by a twist of fate. Jacquelin, an uptight middle class French lady (Kayla Eva), joins a dating site in search of the perfect novel-like romance and adventure she’s always imagined and she connects  with Bayo (Ramsey Nouah), a self-made young, rich lawyer in far away West Africa who has a seemingly boring life. In a few weeks, she finds herself in Nigeria to meet the man behind the computer screen.

The story takes a twist when Jacquelin and Emeka’s driver become victims of mistaken identity.  RUN is a story of survival, adventure, deceit, betrayal and finding true love.

According to the filmmaker, RUN will Premiere in Paris and will screen in cinemas all over the world in the early parts of 2017. From the little we’ve seen so far, the premiere can’t come soon enough!
Join the conversation on social media using the hashtag  #runthemovie
Previous Article

The Curious Case Of Chinese Clubs