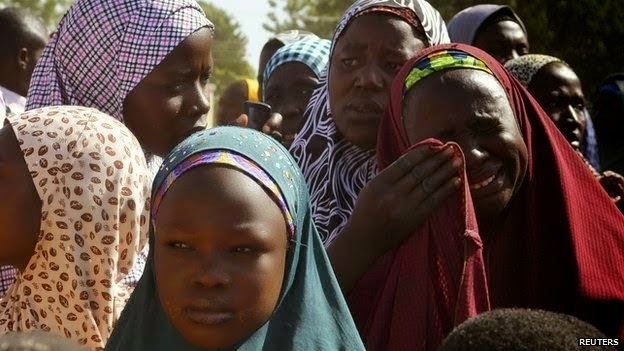 Four nights ago, over a hundred female students of Government Girls Secondary School, Chibok in Borno State were abducted by members of the Boko Haram sect who stormed the school and bundled the girls into trucks.
Although it was reported 2-days ago that the military freed most of the girls, the Principal of the school Mrs Asabe Kwambura has refuted such reports and confirmed that they have just 14 girls so far. Only God knows what those little girls are going through as you are reading this.
Harrowing rape experience and death may not be far from the picture. Although we hope and pray against such, that certainly would be the tormenting image in the minds of their families and friends. At times it’s not the death of a dear one that pains most, but the thought of how he died. But, of course, that’s not the first of such incidence.
That same black Monday, at dawn, four suicide bombers detonated improvised explosive devices killing more than 89 people, with over a 275 others hospitalized, in a busy motor park in Nyanya, a satellite community bordering the Federal Capital Territory and Nasarawa State. There is no telling the numbing experience of the relatives of the victims.
We are at war! is at war with Boko Haram. Only we fail to realize it, we have been at war with Boko Haram since 2009 or thereabout.
Nigeria is the most religious country in the world. May be this is a war of the spirits. May be God made a wager, I mean a kind of bet, with the devil to see who would win. Yet they (God and Satan) chose not to interfere directly. Only to influence men, but demons are breaking the rules. They are embodying the pigs!
I don’t know about you, but the recent statement by the president that Boko Haram is a temporary problem is not surprising. He has never said anything that suggests action. The demons are stronger than him. At least he has said that much when he confessed that members of the sect are in his cabinet.
Rather than deal with ‘identified’ sponsors of Boko Haram in government quarters, security agents of the presidency are allegedly detaining Isiaka Yusuf, for giving detailed minute-by-minute report few weeks ago on his Tweeter page on the attempted jailbreak by the sect to free its members detained in the Department of State Security facilities, just a stone’s throw from the presidential villa.
Isiaka told the world how Boko Haram members disarmed SSS officials and almost succeeded in freeing their colleagues but for the prompt intervention of the Army. On Tuesday, our law makers fleed the National Assembly Complex, with their hearts in their mouths for fear of Boko Haram.
Nigeria is not safe. Even Aso Rock is not safe. The demons are breaking the rules. They are on the prowl. We can’t continue to pretend that things are OK; they are not!
We must exorcise this Boko Haram demon before we lose our dear country to them. We can’t fold our arms and just wish away these invading demons. We must show them the mirror. Yes, we must give them a taste of what they are. The presidency must expose and deal with every sponsor of Boko Haram in its fold.
The weapon of terror is fear. Every terrorist group seeks to overthrow socio-political structures in the society where they operate. Their aim most often is to impose on the society their way of life and their god. Their only weapon is fear. Their only weakness is fear! Oh yes, that’s true. You need to seethe fear on the face of Osama bin Laden when he was ambushed by US Navy.
All of us – Muslims, Buddhists, Christians, pagans, politicians, commoners, and the rest – must unite against Boko Haram. We must fight them back. Religious leaders must stop lulling their members with the requests for more prayers. We have prayed enough, and God has heard us. It is time for action.
The government should not wait any longer. It must wake up to the Hot Pursuitof members of the sect and their allies to wherever their camps are. A recent interview of a former Nigerian diplomat to has revealed that a lot of Nigerians were trained in the al-Qaeda terror group in .
Whatever country there are hiding, Nigeria should pursue them to their hide-out and destroy the demons. To do this, we may have to seek the help of the international community. Whatever we must do; now is the time to employ the policy of hot pursuit. We may have to ask the agency, NIA, what they know about this insurgency.
They had predicted that Nigeria will disintegrate in 2015, or is it 2020? They knew about al-Qaeda’s activities in and were instrumental to pressurizing the former government of to evacuate Osama from their country then. They know something the rest of us don’t.
We must establish a Borderline Security to monitor our porous borders, acquire and share security information with other security agencies. Whatever enchantments these demons are making cannot stand our chants of ‘Nzogbu, Nzogbu, Enyimba Enyi.’ Let’s move together and cast the demons into hell!
Written By:
Previous Article

House On The Rock Church hosts ‘The Word Conference’