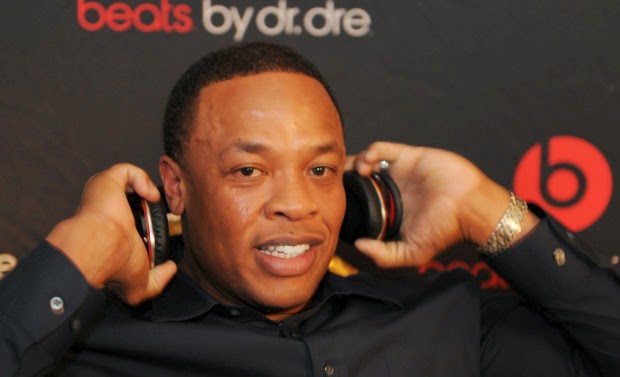 Is Dr Dre the first billionare in Hip-Hop? you can file the answer to that under “not certain yet”. However, one thing that is very certain is the report that Apple is looking to buy Beats Electronics for $3.2 billion and this has got people wondering: could the deal make founder Dr Dre hip hop’s first billionaire?

about two weeks ago, A recent ranking by Forbes of the wealthiest rappers in 2014 estimated that Dr Dre’s net worth was $550 million – just behind Sean Combs (aka PDiddy) who took the top spot with $700m (Jay Z came third with an estimated $520m).

This means that Dre would need only an additional $450 to make it into the elite billionaire’s club.
Now, I am not a financial analyst so cannot give you the nitty-gritty but I do know that the required  sum is roughly equal to a 15 per cent stake in Beats Electronics if the $3.2 billion valuation holds true.Only,I  don’t know exactly how much of a stake Dre holds in Beats Electronics.
According to a close source, Apple is looking at Dr Dre staying on even after the acquisition. To think that we actually predicted PDiddy to be the first hip-hop billionaire!

Below is a sort of confirmation video posted by singer,Tyrese Gibson. In it, a “drunk” Dr Dre states that he is the first hip-hop billionaire. Congrats may be in order!

JUST IN: According to Forbes, Dre owns 20-25% of Beats; Apple’s $3.2B buy would make him rap’s richest, worth ~$800M after tax. so we guess the billion is very close but not here yet?
Previous Article

IS JOURNALISM IN NIGERIA DEAD?