The 2013 Ballon d’or awards just took place this evening, We are bringing you the best part of the awards.
Well, the high point of the Ballon d’or is when the winner of the World Footballer of the Year award  is announced and this year’s award got everyone on pins and needles as people were anxious for the winner more than ever.
The favourite to win the 2013 Ballon d’or was Cristiano Ronaldo and he got it as expected, Ronaldo has had a phenomenal football year, scoring 66 goals in 56 games in 2013.

He also is the 2nd Portugese player to have won the esteemed award twice. Congratulations Ronaldo, well deserved! Franck Ribery and Lionel Messi also had a fantastic year.


Another highlight of the award is the reveal of The FIFpro World XI : 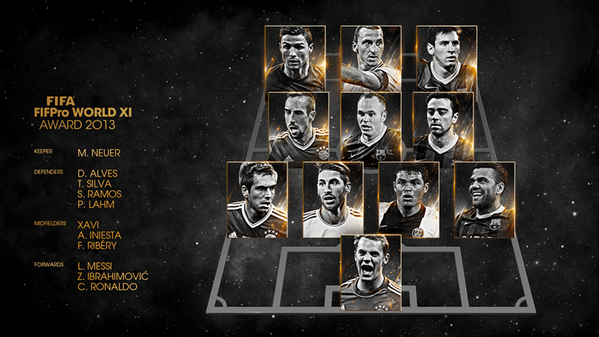 Neuer; Lahm, Ramos, Thiago Silva, Dani Alves; Ribery, Xavi, Iniesta; Ronaldo, Ibrahimovic, Messi . It is a formidable team, would be difficult to beat really. Did you notice there was no EPL player on the list? what a shame.
More cute photos from the awards…

MEMORABLE QUOTES FROM THE GOLDEN GLOBES

KANYE SCORES 7 OUT OF 7 AS "YEEZUS" GOES PLATINUM