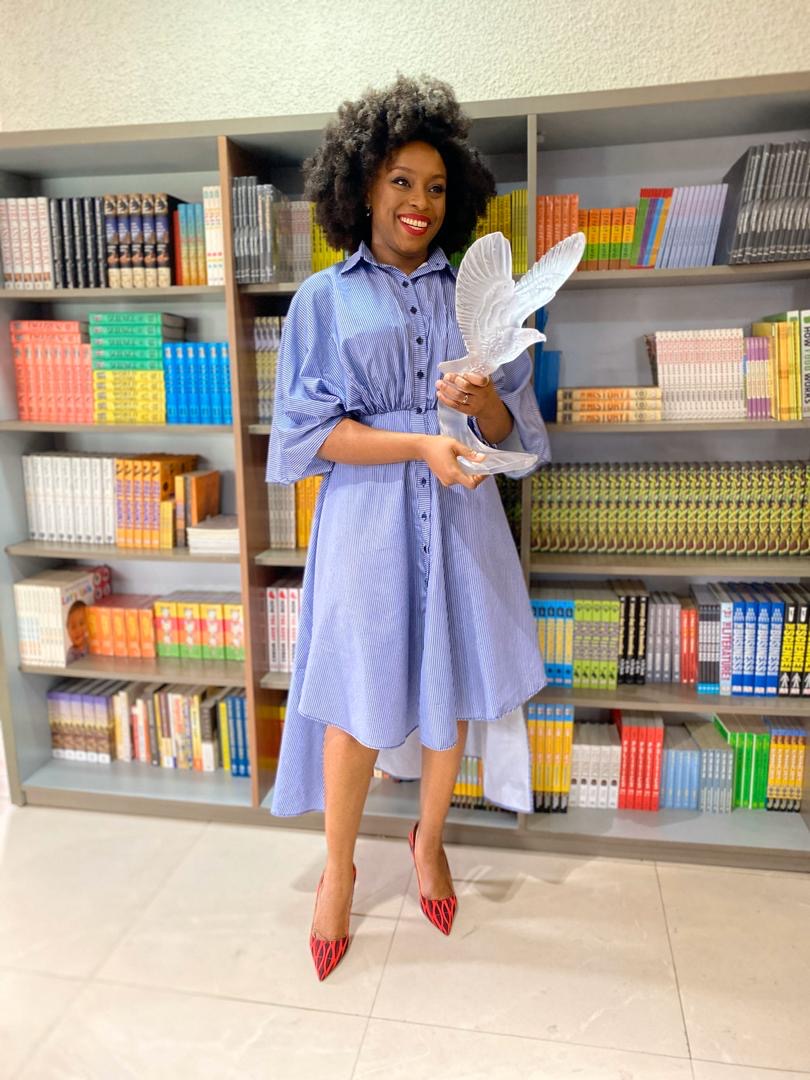 Multiple award winning writer, Chimmanda Ngozi Adichie has been named “Woman of the Decade” (Editor’s Choice) by ThisDay Newspapers in celebration of their Silver Jubilee Anniversary. Although Chimamanda could not attend the award ceremony held on the 20th of January at the Eko Hotels Convention Centre, VI, Lagos; she was recently presented with the award at the ARISE office.
The “Woman of the Decade” Award was specially presented to Adichie by veteran poet and playwright, Prof John Pepper Clark-Bekederemo (J.P Clark). Adichie took to her Instagram page to share her thoughts saying “JP Clark’s poetry means a lot to me – and to my character Obinze in AMERICANAH! Thank you to Thisday Newspapers for naming me ‘woman of the decade’. I was delighted to have the award presented by JP Clark” she wrote.
A total of 24 winners were selected with 2 persons honoured with an award in the People’s Choice and Editor’s Choice in each category. “Winners of the awards were picked both by the public and ThisDay editors from a pool of personalities and corporate organisations in a voting process that lasted one week,” ThisDay revealed of the selection process. “The board noted that whereas the editor’s choices were based on the strength of industry knowledge and professional advice, the readers’ votes were mostly based on their perception”
Alongside Adichie, Deputy Secretary General of the United Nations; Ms. Amina J.  Mohammed was also named “Woman of the Decade” based on the people’s choice. Other recipients of the ThisDay Newspapers’ awards for the decade include President Muhammadu Buhari (People’s Choice) and his predecessor; Dr Goodluck Ebele Jonathan; Aliko Dangote, Segun Agbaje, Ngozi Okonjo Iweala, Herbert Wigwe, amongst others.
Prior to this award, Adichie became the first recipient of the Belle van Zuylen Ring for “her contribution to humanity through her literary works and her public engagements” on the 11th of January by the International Literature Festival Utrecht (ILFU), Netherlands.
Earlier in January, Chimamanda Adichie was also named one of the 20 women who will shape the year 2020 by ThisDay Newspapers, with the title ‘More Honours Trail Her’. The paper made mention that, “In the last few weeks of 2019, Chimamanda was accorded more honours, echoes of which will reverberate through 2020”.
Previous Article

CAREER | Tips On Nailing That Interview 2020