just in case you haven’t heard about him yet:

A 14-year-old student claims to have found a way of saving the US government $400 million dollars- simply by changing the font they use for official documents.

It all started as a science fair project for Suvir, who lives in the township of O’Hara outside Pittsburgh. He noticed there was talk at school about saving paper but nobody was talking about saving ink (which is even more expensive). He decided he was going to figure out if there was a better way to minimize the constant flurry of paper and most importantly, save ink.
Collecting random samples of teachers’ handouts, Suvir concentrated on the most commonly used characters (e, t, a, o and r) and then went to work. So, with the help of a software program he was able to estimate how much ink different fonts used. From his studies, Suvir figured out that by using Garamond with its thinner strokes, his school district could reduce its ink consumption by 24%, and in turn save as much as $21,000 annually.
“Ink is two times more expensive than French perfume by volume,” Suvir told CNN
He then extended the study to a national level and concluded that if the federal government used just Garamond it could save $136 million per year.An additional $234 million could be saved annually if state governments also jumped on board, he reported.
He has since looked to publish his findings in the Journal of Emerging Investigators. Sarah Fankhauser, one of JEI’s founders said: “We were so impressed. We really could really see the real-world application in Suvir’s paper.”
Gary Somerset, media and public relations manager at the Government Printing Office, described his work as “remarkable”, but would not discuss whether the GPO was prepared to actually to actually implement Suvir’s idea. 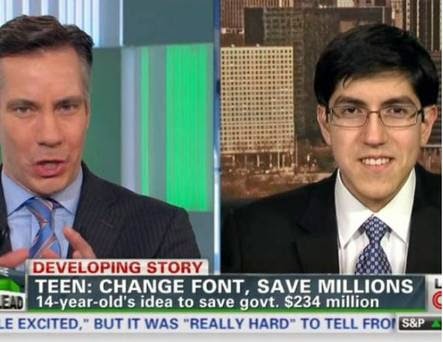 Even at 14, Suvir understands how difficult such a project might be to implement — “I recognize it’s difficult to change someone’s behaviour. That’s the most difficult part.” But he remains positive, “I definitely would love to see some actual changes and I’d be happy to go as far as possible to make that change possible.” He said to CNN
how impressive is this 14 year old? If that isn’t  good Monday inspiration, I don’t know what is. Go and conquer this new week and uhhh… maybe change your font style? (smiles).
Previous Article

PHOTO OF THE DAY: THE ROYAL FAMILY (PRINCE WILLIAMS, KATE AND BABY GEORGE)