I was talking with a friend when she verbally expressed what I was thinking inside of me. We were analyzing the recently held Grammy awards from fashion, couples and winners to performers at the event.

Speaking of performers at the Grammys, there were a couple of outstanding ones e.g.  Kendrick Lamar’s.  But for the purpose of this editorial, we will be looking at Beyonce and Jay Z’s opening performance at the Grammys.  That Beyonce is an excellent performer is not in doubt but lets talk about her recent fashion sense here. I loved her performance + her outfit until she turned and showed the back (whoa there, that was some generous backside on display). 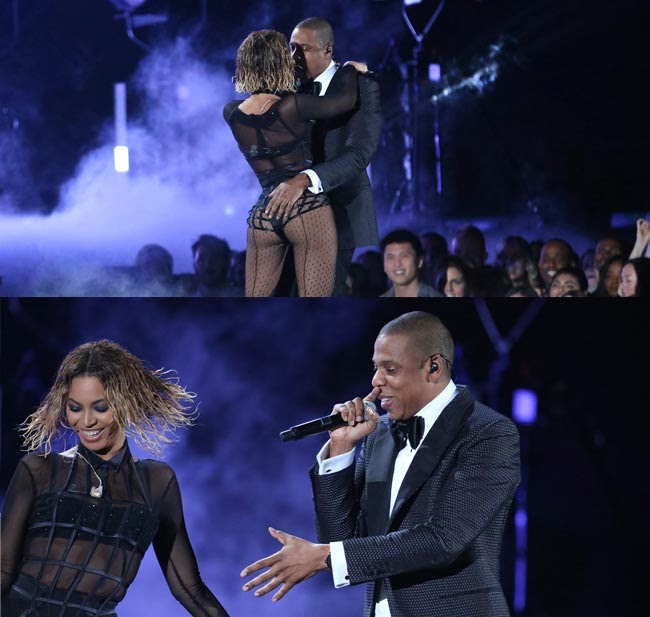 It is ironic however that whilst she was giving that steamy performance, the social media were agog with praises and affirmations of love for Beyonce. I recall last year when Miley Cyrus performed on stage with Robin Thicke at the VMAs, the reaction was different. Viewers and celebrities alike were  screaming bloody murder and critiquing her, now Beyonce is doing the exact same thing and getting praised albeit a few complaints from parents here and there.
One is forced to ask, is it that we pick and choose who to criticize? Although she didn’t stick out her tongue miley-style, is it OK for Beyonce to be risqué on stage but not another artiste? Do we pat one at the back and scold the other or is it “uncool” to not like what Queen Bey does?
It is however sad how women have “sexified” themselves so bad that a man will be all dressed up in suit and tie and the woman near him is almost naked a la Jay Z and Beyonce and as seen in many magazine covers today.
Do you think if Beyonce had been dressed properly that it would have taken away from the performance?  Nobody is saying cover yourself from head to toe but I am certain if she had worn knickers that were covered at the back as they were covered at the front instead of that tong, it would have been a better outlook.

The same Beyonce who is a crusader for feminism and respect for womanhood has retorted to being a sex object possibly because she thinks sex sells. What message are you passing on? Does wearing skimpy dresses to the white house for occasions that didn’t warrant them and showing your lady parts on national TV promote gender equality?

Not to endorse Miley’s behavior but come to think of it; between a 21 year old and a 32 year old artiste, who should be gyrating on stage wearing ridiculously exposing knickers or bikini bottoms?
Omawumi, for Glace Editorial
Previous Article

BETWEEN THE DELTA STATE SSG AND A GUARDIAN JOURNALIST