“Politicians need to watch what they say and their body languages so they do not incite others and sometimes, these politicians do it intentionally” 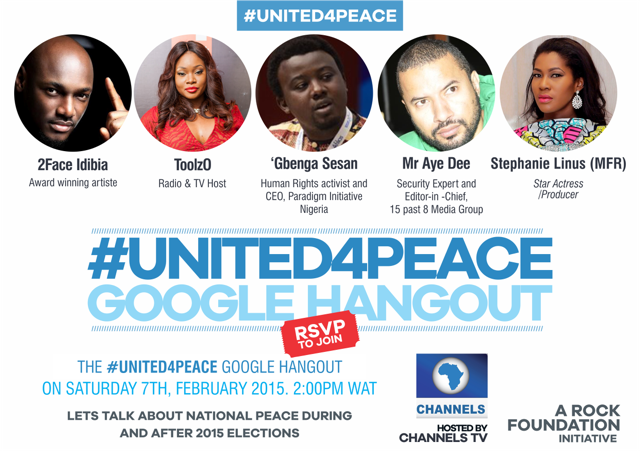 At 7pm on Saturday the 7th of February, a day before Selma movie hits the big screen at the Lagos Premiere, the United4Peace Google Hangout was hosted by Channels TV.

The line-up of hangout participants which was drawn from diverse industries and political persuasions further buttresses the Unity and Peace initiative spearheaded by the House on the Rock Church in collaboration with The US Embassy and the Rock Foundation. 2Face Idibia, Gbenga Sesan, Mukthar Dan’Iyan and others connected from all over the globe, from Lagos, to NewYork, South Africa, Dubai, France and beyond as they deliberated on the need for national peace before, during and after the 2015 general elections.
Gbenga Sesan, the Managing Director of Paradigm Initiative Nigeria added that hate speeches have no business coming up on air. According to him, people who default, irrespective of their statuses should be punished and brought to book. Stephen, who joined in from the South of France felt that the NCC need to do their jobs better and not allow hate filled adverts go on air or print.
The group looked at the role of social media in the elections and how things play out on virtual communities. To Mukthar, popularly known on the social media scene as Mr Ayedee, the people who shape opinion amongst the public are on the social media. Although it does not necessarily translate to votes, social media is a great tool. He further stressed that the electorate need to understand that the only power they have in a democracy such as Nigeria’s, is who they decide to make as their leader. He added sadly that for some people, their votes mean nothing to them so they are willing to trade it for a cup of rice.
Participants ended the hangout on a note of peace advising that the elections do not mean war, and if we all pushed for peace, a change will come.
Popular actress Ireti Doyle and singer, Yinka Davies were also part of the hangout although they couldnt be active due to technical difficulties. Ireti Doyle, however sent in some comments and advised that the Nigerian citizens should refuse to feed the enemy and be violent free, she added that regardless of candidate or party choice, peace ought to reign.
Watch the complete video of the hangout HERE
Previous Article